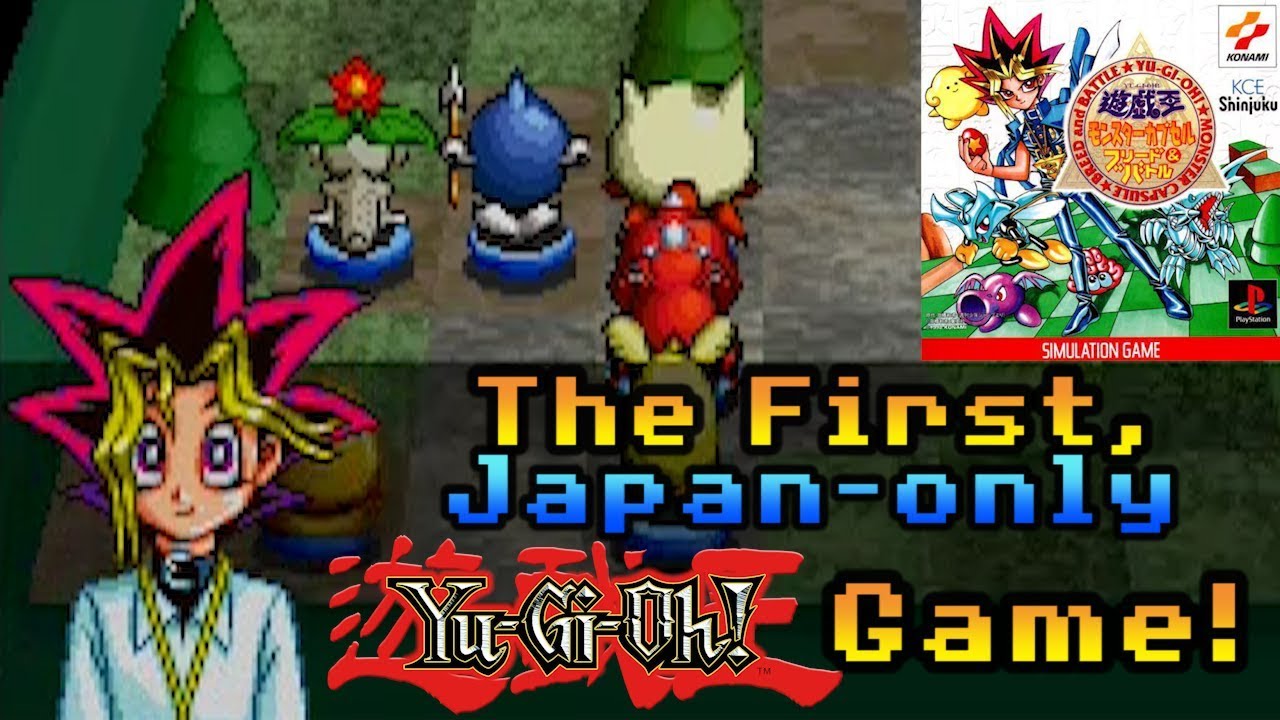 Japanese Menus and gameplay are in Japanese. Is a Japanese manga created by Kazuki Takahashi. It has produced a franchise that includes multiple anime shows, a trading card game and numerous video games.

Most of the incarnations of the franchise involve the fictional trading card game called Duel Monsters (originally known as Magic & Wizards), where each player uses cards to 'duel' each other in a mock battle of fantasy 'monsters'.

The Yu-Gi-Oh! Trading Card Game is the real world counterpart to this fictional game on which it is loosely based. Tells the tale of Yugi, a shorter-than-average high school student who was given the fragmented pieces of an ancient Egyptian artifact, the Millennium Puzzle, by his grandfather. Upon reassembling the Puzzle, he is possessed by another personality who is later revealed to be the spirit of a 3,000-year-old Pharaoh (5,000-years-old in the English anime) called Atem, with no memory of his own time. As the story goes on, the two of them (together with Yugi's friends), try to find the secret of the Pharaoh's lost memories and his name, with the Duel Monsters card game being an ever prevalent backdrop or plot device.

Monster Capsule Breed & Battle' is Konami's first Yu-Gi-Oh! It uses a variant of the Capsule Monster Chess game from the manga. The promotional cards included with the game predate the Yu-Gi-Oh!

Official Card Game. They are also based on the Duel Monsters game from the manga, but are not legal in the OCG or TCG. Manufacturer's description: Or to give battle when and where the monster was brought up in miniature garden. Training itself is already a strategy! Miniature garden can make six at a time. Grow in various types of egg color and the environment.

The subreddit for players of the Yu-Gi-Oh! Card game, video games, or fans of the Yu-Gi-Oh! Anime series or manga. Discuss tactics, episodes, decks, or whatever you'd like. Banner credits: (New Reddit, Old Reddit, and mobile) New, returning, or learning? Click the image below to check out! See the dropdown menu for important moderator announcements, links to other Yu-Gi-Oh!

Subreddits, and other important resources! Click or the image below to join the Discord server for real-time discussion of Yu-Gi-Oh! And other topics: if you’ve been muted/banned from the server and want to appeal. Rules - Read before posting! Rules: • Be civil and respectful at all times. • No off-topic, low effort, shitpost/meme, redundant, misleading, or NSFW submissions. • Use the stickied Megathread for basic questions and ruling queries, and check out if you're just starting or returning.

• This subreddit is not a marketplace. Use the Marketplace Thread or for your buying and selling needs, including card valuation. • Use our deck when making an R/F post. • Give credit and source content.

Use sites like SauceNAO or Tineye for image sources. Clarify when you're posting OC instead of someone else's work. How we roll fast five remix song download.

Don't spread misinformation. • No advertising, self-promotion, etc. Without approval and/or prior community involvement. • Report rule-breaking content; don't inflame or exacerbate the situation. Direct your questions about subreddit policy and moderation to modmail, or to the most recent State of the Sub post. New users: Posts from brand-new accounts and those with very low karma will need mod approval to show up after being posted.