However, I don't hate this book. It still is likable especially for readers who love gothic stories, mystery and historical fiction with a bit of eroticism. It's just that I was expecting a bit more so I guess my rating was primarily due to some unmet expectations. Those expectations were: 1) I was suprised to find out that Nick Joaquin wrote short stories in this genres: gothic, mystery and with sexual undertones. I mean, my previous books by him were all historical fictions (a play and a family drama) and a history book. I was thrown off a bit when I was reading the first two stories of the 3 included in this book because they were totally different from these books: (3 stars), (3 stars) and (4 stars).

2) I found Nick Joaquin's (1917-2004) writing here a bit lofty to the extent of making his prose quite hard to understand. I particularly noticed this in the way he opened his stories in this collection. The best example for me is the first paragraph in the third story, 'The Order of Melkizedek.' 'Toothbrush in raised hand, to tell Customs it was all his gear, Sid Estiva, lately come down from heaven but now unwinged by the general guilt, slunk past the courts of the baggage inquisitors, was thumbed the way to the airport lobby, stiffened as he shambled by, ran smack into a tall woman in green who thrust her mouth at his face as it to kiss him.' I find this sentence too long and I had to read this twice and thrice. I know that Nick Joaquin was a good writer and maybe this was written at that time when there was a notion that if a story or novel was hard to understand, it is a good piece of literature. 3) I thought that this book is entirely different from (to be read).

When I was to start reading this book, I compared the tables of contents of the two books and found that the three stories here are also included in the other book. Waste of money (P195). 4) The first story, 'The Mass of St. Sylvestre' was recommended by my friend Jzhunagev as a good story to read on New Year's Eve. So I thought that it was about starting anew, faith, new beginning, hope despite all odds, etc. 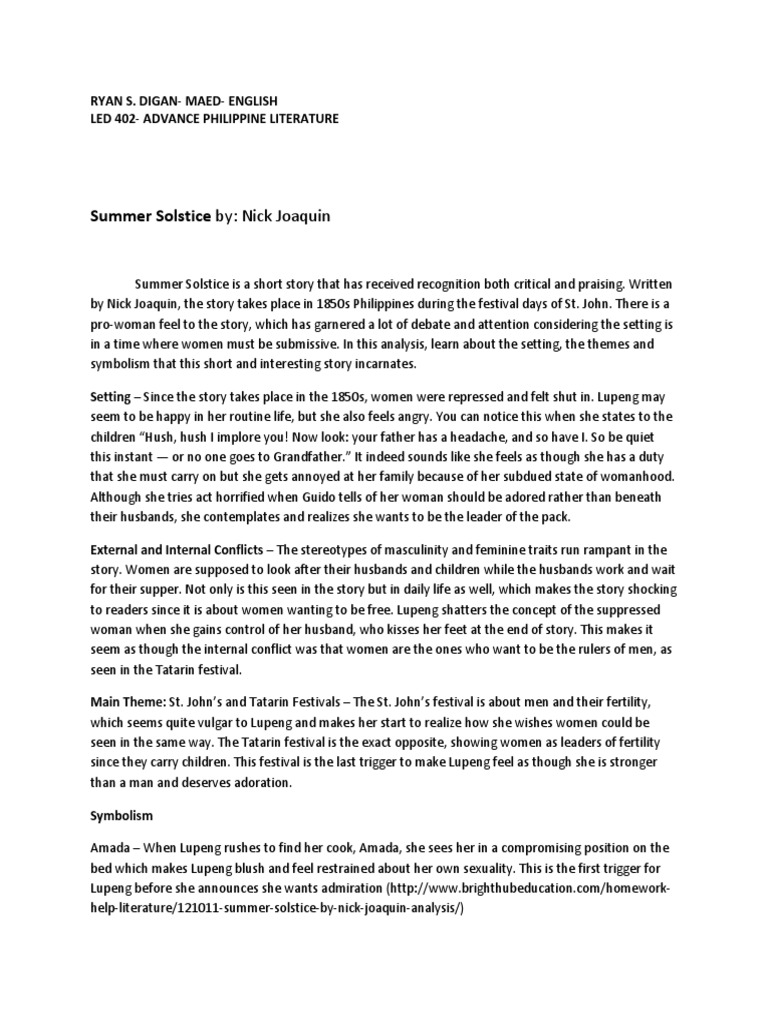 Only to find out that the story is only set on a New Year's Eve and it is about this mysterious man who is cursed so he is turned into stone and becomes human again to attend a thousand New Year's Eve's holy masses.In fairness to Jzhun, the story is nice but not appropriate for New Year's adult (middle-aged man's read). However, among the three stories, I liked 'Summer Solstice' more because I saw 'Tatarin' movie in a MMFF (Metro Manila Film Festival) at least a decade ago when Dina Bonnevie played Lupe and she was just too hot to play an semi-erotic role. However, in the book the spelling of 'Tatarin' is 'Tadtarin.'

As for the third story, 'The Order of Melkizedek,' it felt like a Dan Brown novella for me, what with the mysterious organization (order) of Melkizedek (the first priest) and the death of the taxi driver. I appreciate the versatility of Nick Joaquin but I still prefer to read his more serious non-Gothic side. As a follow up review to another collection of Nick Joaquin classics, the subsequent stories continue its theme of historical facts, magic realism, and personal journeys. The Mass of St. Sylvestre of an iconic church with the celebration of the image of St. Sylvestre every New Year. It is more of a historical narrative as it describes the traditional ways of honoring the saint dedicated to the largest church in the city of Manila.